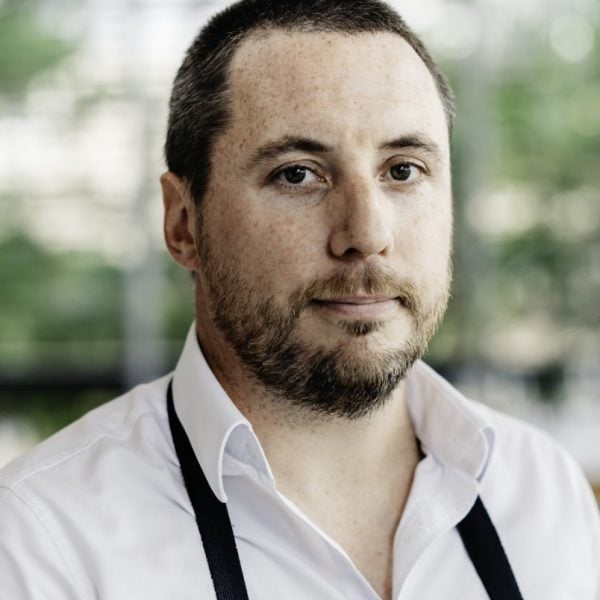 Shoalhaven, NSW – Bundanon announced today the appointment of Douglas Innes-Will as Executive Chef after an extensive search process. Innes-Will has now commenced and will be responsible for overseeing the operations, menu and staff of Bundanon’s café, in addition to unique events, accommodation dining and catering for the Art Museum’s high-profile events and weddings.

Embedded within the landscape, the new 500m2 Bundanon Art Museum designed by Kerstin Thompson Architects (KTA) opened its doors in January. The reimagined Ramox Café is positioned next to the Bridge for Creative Learning, a 160-metre long by 9-metre-wide structure that bridges the existing gully in the sloping hillside. Expanding on the hospitality offering, the café and dining facilities are housed next to Bundanon’s new accommodations, offering sweeping views over the Shoalhaven River to be enjoyed by up to 60 overnight guests from public or education groups and visitors to the Museum.

“We are delighted to welcome our new Executive Chef Doug Innes-Will to Bundanon,” said Rachel Kent, CEO of Bundanon. “Doug is extremely talented, with an impressive culinary background honed at Queensland Art Gallery & Museum of Modern Art (QAGOMA), Qualia (Hamilton Island’s 6* offering) and many other noteworthy destinations. We are confident that with years of experience curating food at institutions and hotels, visitors and Shoalhaven locals will love what he brings to the table. We look forward to expanding our hospitality offering for Bundanon and our audiences, with a focus on destination dining.”

Citing The South Coast as one of his main inspirations, Innes-Will will bring a paddock-to-plate culinary philosophy to the gallery with a simple style of cooking that will be a continuation of Bundanon’s sustainability charge and radical solution to climate change.

“I am truly thrilled to be taking the lead at this extraordinary new Australian cultural destination,” said Douglas Innes-Will, Bundanon’s Executive Chef. “I am looking forward to building on the momentum of Bundanon with my fresh take on quintessential Australian fare and sourcing ingredients and a robust team from my old Shoalhaven stomping ground to introduce visitors near and far to a completely new dining experience.”

A year as Sous Chef to John Evans at another south coast icon, Paperbark Camp, followed before a move to James Viles’ Biota Dining in Bowral. Innes-Will returned for a two year tenure as head chef at Paperbark Camp in 2010 before joining David Campbell’s Hungry Duck in Berry as Sous Chef in 2012.

Innes-Will was appointed executive chef at Spicers Peak Lodge in Maryvale, Queensland in late 2013 where he was awarded two hats two years running by the Good Food Guide 2015-2017 and Australasia’s Best Culinary Boutique Hotel at the World Boutique Hotel awards in 2015.

Executive Chef at Hamilton Island’s 6 star offering Qualia followed in 2016, with 2 years at the helm of the resort’s culinary operations.

Innes-Will will also be involved in curating a new wine selection for the restaurant. Local wineries and breweries are championed in the drinks menu.

Bundanon presents a year-round program of exhibitions of modern, contemporary and First Nations art, as well as new commissions. It includes a state-of-the-art storage facility that will house and protect Bundanon’s extensive $46.5 million collection of some 4,000 items.

ABOUT CHEF DOUGLAS INNES-WILL: Doug Innes-Will was raised in Glamorgan Vale west of Brisbane before his family made the move to the New South Wales south coast. It was there Doug began his culinary career completing his apprenticeship under Horst Bleuel at Theodores Brasserie in Nowra. Innes-Will’s first Head Chef role came in 2006 at the iconic Hyams Beach Café. Followed by a move to James Viles’ Biota Dining in Bowral, Innes-Will held a two year tenure as head chef at Paperbark Camp in 2010 before joining David Campbell’s Hungry Duck in Berry as Sous Chef in 2012.

Innes-Will was appointed executive chef at Spicers Peak Lodge in Maryvale, Queensland in late 2013 where he was awarded two hats two years running by the Good Food Guide 2015-2017 and Australasia’s Best Culinary Boutique Hotel at the World Boutique Hotel awards in 2015.

Following a desire to undertake challenging and rewarding roles, Innes-Will began at Hamilton Island’s 6 star offering Qualia as Executive Chef in 2016, enjoying 2 years at the helm of the resort’s culinary operations. Drawn by the opportunity to work in a creative environment and the iconic nature of the galleries and the art within, Innes-Will was appointed QAGOMA’s executive chef in May of 2018.