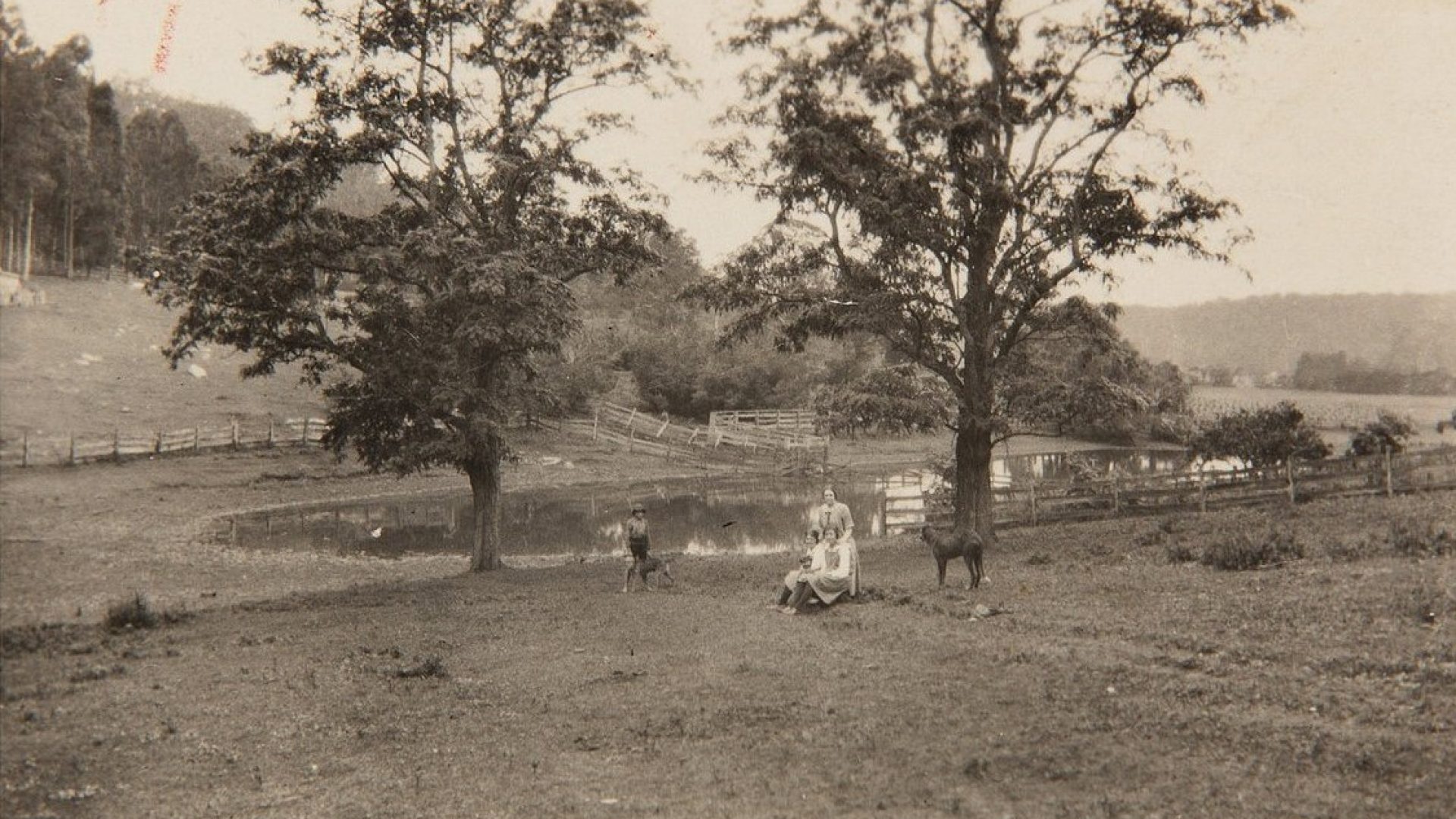 The very social Mackenzie family were known as the “Bundanon push….” Dances were held in the big room in the main house for both the family and farm workers with cricket played regularly. – Peter Freeman

Dr Kenneth Mackenzie came to live at Bundanon in 1838 with his wife Julia. They occupied just west of Haunted Point on the Shoalhaven River, and built a timber house on the edge of the tree line above one of the natural water sources at Bundanon (the foundations are still visible on the property). The following year they made application to lease the neighbouring 850 acres. Their five children were born in that house: Helen 1839, Mary 1841, Murdo 1843, Hugh 1845 and Jean in 1848.

The disastrous flood of 1860 impacted dramatically on the landscape of Bundanon and would have hastened the construction of the two-story Georgian stone homestead which had begun in the 1850s.

In 1866 the Mackenzie family moved into the newly constructed, Sparrow Peck finish (also known as Convict or Quarry Pick), sandstone block, two-storey homestead ‘Bundanon’. Julia had died from cancer in 1858 and so never saw it finished. The homestead had been carefully sited above the flood levels of earlier deluges. The floods of 1870 washed away most of the Bundanon outbuildings; however, the homestead and the worker’s huts survived as they were situated at a higher elevation.

Dr Kenneth Mackenzie and his eldest son Murdo returned to Scotland in 1869 to take up ownership of the ancestral home in Dundonnell. On the death of his father, Murdo inherited this property in 1879.

Second son Hugh Mackenzie, inherited Bundanon that same year. Hugh had married Bella Mary Biddulph of ‘Eearie’ (an adjacent property) in 1876. By 1901 they had eleven children all born at Bundanon who, when old enough, were taught by a governess. A tennis court to the east of the house had been constructed by 1902 and was frequently used by the extended family and friends.

Their eldest son Kenneth took over the property on the death of his father in 1917. Under Kenneth, Bundanon was home to between twenty-five and thirty people, including the Mackenzie family and five to six farm labourers and servant families. However, Kenneth Mackenzie Jnr’s ownership of the property was short-lived as he drowned in 1922 in the Shoalhaven River trying to save his daughter Helen, who had been washing her pony before going to the Nowra Show. The Jacaranda tree in the garden was planted in memory of Kenneth and Helen.

Following the drowning death of her husband in the Shoalhaven River, Kenneth’s widow, Aylene Mackenzie, with her daughter Jean and son Colin, departed the property in 1926. The ‘Bundanon Farm’ was then leased to tenant farmers for the next 40 years.

On Sunday morning 29 January 1922, around 11 o’clock, Mr Kenneth Mackenzie aged 42, and his daughter Helen aged 12 years old, were both drowned in the Shoalhaven River at Bundanon. The funeral was held on Monday 30 January. An article was published on the front page of The Shoalhaven Telegraph, Nowra, on Wednesday 1 February, 1922, and a Coroner’s report was printed on the next page.

The sad news of the drowning death on Sunday morning of Mr Ken. Mackenzie and his young daughter Helen, came as a great shock to the community. – The Shoalhaven Telegraph, 1922

Mr Reuben King, JP (District Coroner) on Monday held an enquiry regarding the double drowning fatality at Bundanon on Sunday. The following evidence was taken:-

Elinor Frances Anderson stated: I am a governess, and resident at Bundanon; on Sunday, the 29th instant, at about 11.00am. I accompanied Mr Mackenzie, his two daughters, Jean and Helen, and Elinor Rothwell to the Shoalhaven River for the purpose of swimming horses; the deceased, Helen Mackenzie soaped the ponies and put straps round the two black ponies, as they had no mane; the straps were for Jean and Helen to hold on to; after soaping the ponies Jean Mackenzie, Elinor Rothwell and the deceased Helen Mackenzie each rode a pony back into the river, the two black ponies swam across towards the opposite bank; when they reached the deeper water the ponies seemed to struggle, and Jean and Helen slipped off into the water. The deceased, Kenneth Mackenzie, was on the bank of the river on the homestead side; when he saw his daughter Helen in difficulties he pulled off his boots and socks, jumped into the ricer, and swam to where Helen was: he caught hold of her and held her out of the water, he called out, but both deceased seemed to sink without much struggling; Elinor Rothwell then galloped to the house for assistance; a man named Oswald McClelland came to the river, I saw him go into the water, I ran some distance to get a boat: I afterwards saw the bodies of Kenneth Mackenzie and Helen Mackenzie on the bank of the river.

Jean Munro Mackenzie stated: I am 14 years of age, and am the daughter of the deceased, Kenneth Mackenzie, and reside at Bundanon; on Sunday, the 29th instant, I went with my father and sister Helen and Elinor Rothwell and Miss Anderson to the river for the purpose of washing some ponies we were getting ready for the show; my sister Helen, Elinor Rothwell and myself each rode a pony into the river to wash them; we came back on to the river bank, and my father soaped the ponies, and we each rode back into the river. When I neared the opposite bank my pony struggled in deep water. I noticed Helen’s pony struggling also, we both slipped off our ponies; I struggled to the bank; I heard my sister call out; she could not swim very well; I saw my father swimming towards her; I saw him catch hold of Helen and hold her above the water; he was coming toward the river bank; they both went under the water, but came to the surface again; after struggling for a while they both disappeared, and did not rise again; I saw Elinor Rothwell jump on her pony and gallop towards the house for assistance; Mr McClelland came to the river on Elinor’s pony; he jumped into the water and swamn to where father and Helen went down; he dived and brought my father’s body up first, and brought him to the bank; he then went back into the river and recovered the body of my sister, I saw the doctor arrive shortly after.

Oswald Oscar McClelland stated: I am a farmer, and reside at Bundanon; on Sunday morning, the 29th instant, I was lying on my bed when Elinor Rothwell called “help”; I ran on to the verandah; Elinor said, “Mr Mackenzie and Helen sank in the river”. I jumped on her pony; she told me where to go; I reached the river in about three minutes; Jean Mackenzie was on the opposite bank; she pointed out where her father and Helen went down; I swam out and dived down; there would be about 8 or 9 feet of water, the water was fairly clear, I saw the two bodies lying on the bed of the river close together, I was somewhat exhausted and rose to the surface; I dived again and recovered the body of Mr Mackenzie first, and took it to the bank and laid it on the sand; I went back immediately, and dived twice before recovering the body of Helen; the bodies would be about ten yards from the bank, on the side opposite the homestead; when I put the bodies on the bank Jean Mackenzie was the only person present; we turned the bodies on their stomachs and tried to restore animation, but could do no good; I then went and rang up the doctor; he arrived in about an hour, I was present when he arrived and examined the bodies; I helped get them in the boat and bring them across the river, and then on to the house; just when I got to the river in the first place Miss Anderson was away getting the boat, and was not present when I brought the bodies from the river.

Murdo Mackenzie stated: I am a grazier, and reside at Tooloombah, Queensland; the two deceased, Kenneth Mackenzie and his dDaughter Helen, the subjects of the inquest, were my brother and niece; my brother was 42 years of age, and was born at Bundanon: my niece Helen Mackenzie was 12 years of age, and was also born at Bundanon; my brother was a grazier and owned considerable property; he was a married man, and the father of the deceased Helen Mackenzie; he leaves a wife and one son and daughter living; his life was insured; I don’t know the particulars regarding the policies; my brother was of strictly temperate habits, and the accident could not be attributed to any intemperance; I do not know if my brother left a will.

Frederick Arthur Rodway stated: I am a legally qualified medical practitioner, practicing and residing at Nowra; on Sunday, the 29th instant, at about 11.30 a.m., I received a telephone message that there had been a drowning accident at Mackenzie’s at Bundanon; I went immediately to the scene of the accident; I saw two bodies lying on the bank of the river and near the water’s edge; I recognised them as the bodies of Kenneth Mackenzie and his daughter Helen; artificial respiration was being resorted to by some persons present; I examined the bodies, and found external marks of violence; death had occurred probably an hour previous to my arrival; death was due to drowning in both cases.

William James Urquhart (born 1856), nephew of Hugh Mackenzie (Dr Kenneth Mackenzie’s brother) came to Australia from Scotland in 1888 and worked as a farm manager at Bundanon for Dr Mackenzie for more than five years. While at Bundanon he met Mary Goodsell (born 1871) who worked as a housemaid on the property from around 1890.

Mary and William married in July 1893 at the Nowra Presbyterian Church. In the same year William purchased 61 acres of land in Bells Lane, calling it ‘Cambewarra Farm’ where they made their home. They had seven children. Their second son Duncan Roy married Daphne Pearle Browne in 1931. They had one child, a son who they called William James. He in turn married Judith Ann Searl and had four children, with Scott the second born in 1959. ‘Cambewarra Farm’ was sold out of the Urquhart family two years ago.

Standing to the left of Mary in the photograph is said to be the famed Aboriginal man known as ‘Billy Blue’ who was visiting or working on the property at the time. He is renowned for keeping secret his knowledge of gold nuggets in the Shoalhaven valley, which he would periodically present in local towns in exchange for goods.

Local Shoalhaven resident, Scott Urquhart, has identified his great-grandparents in this photograph taken in front of the servant’s quarters at Bundanon.

If you know more about the photograph above please contact Bundanon.